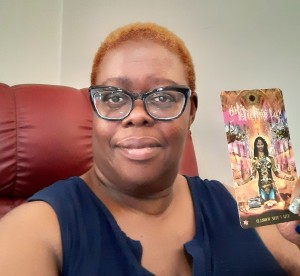 The Starman Tarot is a beautiful 78-card deck based on the Rider-Waite system of divination. The theme of this deck is the mythology surrounding the late great David Bowie. Bowie was a musician and actor who started his career when he was a teenager in the 1960s. He went on to become a superstar.

I was drawn to this deck because I greatly admire David Bowie as an artist. I became aware of him in the ’70s when his song “Fame” was a hit on the charts. I have loved his music over the years, but in addition, I have always been drawn to his distinctive look, which has ranged from in-your-face androgyny to extremely tailored, well-dressed metrosexual. At every stage of the game, he impressed me as being modern and forward thinking. 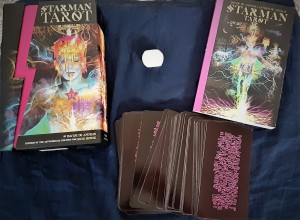 The Starman Tarot is illustrated by Davide De Angelis who worked with Bowie on several art projects including album art. The deck is beautifully packaged and includes a nearly 200-page guidebook. The book is a great read. It describes each card in detail and the introductory chapters also talk about De Angelis’ relationship with Bowie and the history of Tarot itself.

The card stock is excellent, very sturdy, and the finish is so smooth that the cards are very easy to shuffle. But they are not so slippery that they fall all over the place. They fit well in my hands. The backs of the cards have a simple design; the artist says it is alien calligraphy. Why not? It works for me!

When it comes to the card descriptions, De Angelis shares his own personal feelings about what the cards mean to him — and he has some wonderful insights. For instance, he feels that the Chariot and Strength cards are the masculine and feminine sides of the same energy. He explains that whereas the masculine energy of the Chariot card is about determination and taking power through the sheer force of will, the feminine energy of the Strength card is about controlling a situation using serenity and the power of heart. Throughout, it is clear that Davide has thought deeply about the Tarot and that this deck is not just a gimmick.

While some of the images on the cards clearly depict a man or a woman, some of the characters are ambiguous as far as which sex they are. I love this because it reflects David Bowie’s gender-bending persona. Just as importantly, for me anyway, this is in line with my own personal philosophy that it doesn’t matter whether you are a woman or a man, you have both masculine and feminine qualities that you can tap into.

Of course, many of the characters on the card have David Bowie’s face. Most notably is the Starman, which is this deck’s version of the Magician. Starman was a title of a David Bowie song released in 1972. The Alien, which corresponds to the Hermit card, reminds me of the 1976 film The Man Who Fell to Earth, which Bowie starred in. Other cards in the deck that have Bowie’s face include the Moon, the Devil, and the Wheel. 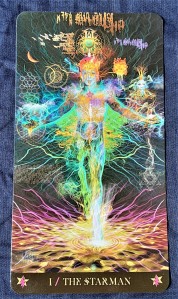 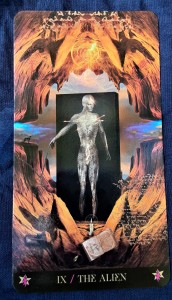 What I also appreciate about this deck is that the artist made it a point to make his characters racially ambiguous, as well. Don’t get me wrong: I love, love, love and respect the traditional Rider-Waite images because they have given us a language for us to tap into our intuition. But all languages evolve over time, and I love it that modern Tarot decks are constantly being created to reflect both the creators of the cards and the society they live in.

As I mentioned up top, the drawings on the cards are spectacular. The palette is rather dark but with bursts of bright color. The imagery is dense and the emotional intensity is off the charts.

If I had one criticism, i will say that I can imagine that some may find this deck to be overwhelming. Not one section of any card is empty, and for me I have to ask the question: Is every stroke symbolic of meaning or is it just decoration? 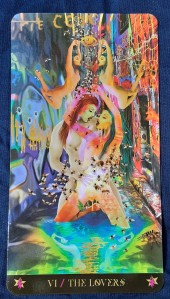 For one example, the Lovers card is simply gorgeous to look at. Around the lovers’ midsection, there is a swarm of bees. In the guidebook, the artist notes that the bees are dripping with honey, and that honey is an ancient symbol of love and fertility and was thought to be a powerful aphrodisiac. There are dozens of bees in that image. Yet, how many bees were needed to convey the symbolism: Would one bigger bee, or even a few bees, be enough?

In this case, I think the sheer number of bees in this image is a stylistic thing rather than a symbolic one. But with that being said, the overall power and feel of this deck is well worth overlooking any excesses. It is a beautiful work and a heartfelt manifestation of self expression. For me, it is a pleasure working with this deck.

What do you think of this review? Have you worked with this deck and how do you like it? Please leave your comments. Peace and Love.

This site uses Akismet to reduce spam. Learn how your comment data is processed.